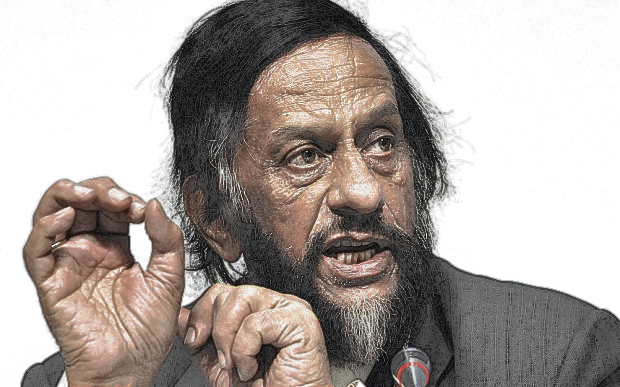 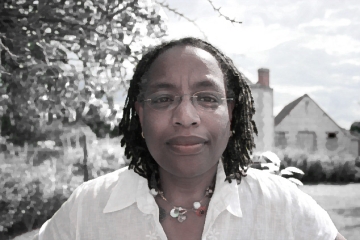 END_OF_DOCUMENT_TOKEN_TO_BE_REPLACED

From the CLIMATE NUREMBERG HUMOR SECTION

Fans of Rajendra Pachauri are hoping a laugh-a-minute monologue he delivered at a fundraiser yesterday stimulates interest in his earlier work.

The polymathic technocrat’s sense of humor tends to be eclipsed by his preëminence as ‘the top UN climate scientist,’ which is understandable enough; if there’s one thing nobler than winning the laughter of the masses it’s winning their tears.

But Pachauri’s wittier, more subversive moments have not gone unappreciated either. A Nuremberg reader and resident pachyologue lists a few highlights from a long life of laugh-jerking:

END_OF_DOCUMENT_TOKEN_TO_BE_REPLACED

From the CLIMATE NUREMBERG HUMOR SECTION

Readers may recall our coverage of yesterday’s address by Rajendra Pachauri at the annual Women In The Laboratory fundraiser. 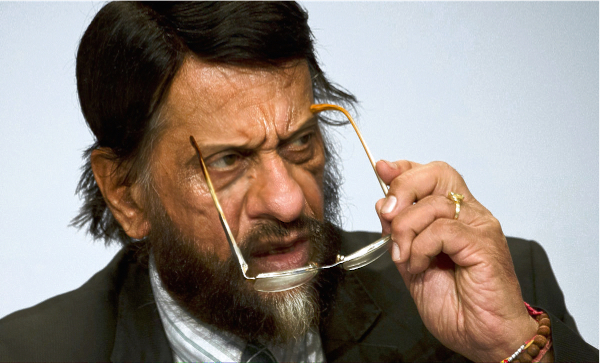 Pro tip! You can tell when Dr Pachauri isn’t having an ironic laugh at the expense of the conventions of the genre: he always takes off his glasses if he’s speaking literally.

Given that Pachauri was speaking to a whole room full of women, you’d think it would be fairly straightforward to find out exactly what he said. Strangely, though, there seems to be material disagreement on a whole range of quotes in Kay Fabe’s report. Just hours after the fact, we’ve already heard two irreconcilable descriptions of the speech from CN’s readership.

Rather than pick the competing rumors apart in some kind of quixotic quest for The Truth, we decided it was better journalism—or at least faster journalism—just to repeat them. As always, caveat lector and all that!

I happened to be one of Dr Pachauri’s rapt audients in Delhi yesterday. It’s a shame the normally dependable Kay Fabe has misheard, misremembered or misreported his funniest passage:

Let me tell you about my girl troubles. Four things happen when girls are in your research institute: they have heaving breasts; excited by their heaving breasts as they breathe in and out deeply, you’re overcome by a lust you have never known before; you fall in love with the girl behind those breasts, with sincerity and unfathomable depth; and you cry when she refuses to give you that textual healing.

Your spirit is destroyed, you continue to long for her, and your tears flow incessantly. Which not only puts you off your cricket game but has impacts downstream, on the lesser aspects of your life—your dharma, your religion, the quality of the science.

There you are, chairing an IPCC meeting and surreptitiously sending her messages; and she still refuses your fervent offers to keep and nurture her heart.

What the hell? That makes about as much sense as—say—not letting me touch you, even though I’ve always treated your body with reverence and as sacred!

END_OF_DOCUMENT_TOKEN_TO_BE_REPLACED 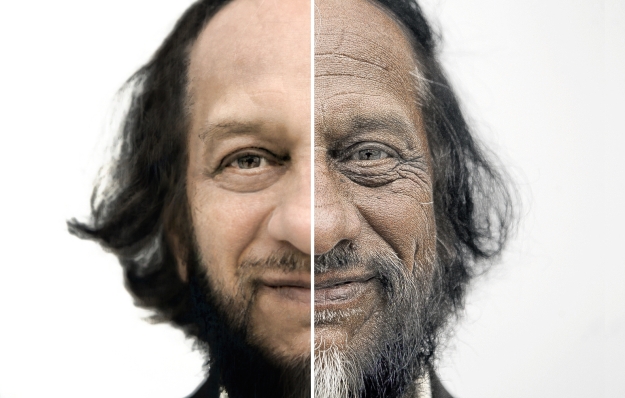 Welcome to our new Humor section,‡ which highlights some of the wittiest, drollest remarks from climate’s razor-sharpest thinkers.

CN’s Asia correspondent Kay Fabe—desperate to be treated as more than a pretty face in the newsroom, apparently—has just filed the perfect story to kick the genre off.

Thanks to social media, which is my way of saying Twitter, yesterday’s hilarious comments by Dr Rajendra Pachauri have gone so virulent, so fast, that some are already calling him the fresh prince of stand-up science. 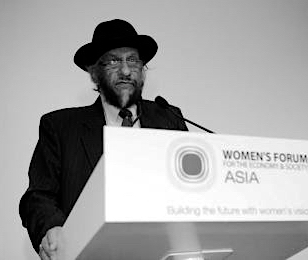 A Life in Women: Pachauri has been a leading speaker on women’s issues for years. But yesterday this serious thinker took on a decidedly unserious topic—women in science—with very funny results!

The world has long admired Pachauri, not just for “ending the debate over whether climate change matters” as Foreign Policy put it in November 2009, but for his personal qualities: cleanliness, articulateness, a religious devotion to science and a healthy distrust of skepticism.

What we’ve never fully appreciated, though—even in hard-core pachyphile circles—is the climate guru’s wicked sense of humor. Now, in the wake of a virtuoso observational riff that literally had the audience a-twitter, will the Nobel laureate’s contribution to comedy finally get the attention it deserves?

Dr Pachauri was the main speaker at a gala fundraiser for Women In The Laboratory—the group that represents millions of women in Asia’s science, technology, engineering and mathematics [STEM] sector—held yesterday in Delhi.

The polymath earned widespread chuckling and applause with a facetiously self-effacing opener:

“It’s strange that a chauvinist monster like me has been asked to speak to women.

“Three things happen when girls are in the lab: they have generous breasts; you fall in love with them; and they cry when you can’t stop cupping them in the conference room.”

“You know the problem with letting girls work in a scientific environment? They burst into tears as soon as you even suggest you can’t take your hands off their breasts,” he joked, to an audience made up mainly of Indian women and Ivan Oransky.

Frank, uninhibited feedback is the lifeblood of scientific research, he explained.

“But sometimes you wonder if it’s worth the drama. I’m often tempted to delete an SMS or WhatsApp message rather than incur the contempt and revulsion of a shapely young subordinate…

“Which couldn’t possibly be good for the science,” noted Pachauri, Nature‘s 2007 Newsmaker of the Year.

“There are days when you just want to let go [of her breasts], walk away [from her breasts] and treat her like the rest of her flat-chested coevals. You can’t, obviously—that wouldn’t be honest. It’s just denial.”

END_OF_DOCUMENT_TOKEN_TO_BE_REPLACED

In spite of the science swami’s name emblazoned across its cover, the bizarre text bears little sign of being written by the serious thinker who was entrusted with leading the United Nations’ IPCC for thirteen years.

Almora shot to notoriety in 2011 when Christopher Hitchens, the titan of Anglo-American letters, used his dying breath to ridicule the book. Hitchens’ last words were said to be: “[The Pseudopachauri’s] palaver—for I’m unable to call it prose—manages to be puerile and senile at the same time. Nurse, how is it possible?”

The novel is too execrable to be quoted here. Morbidly curious readers will have no trouble finding excerpts online, and there is nothing we can do to stop them, but Climate Nuremberg will not condone the hoax by linking to it.

Appearing on India’s NDTV yesterday, Dr Pachauri reiterated that he bears “absolutely no responsibility” for the geriatric bodice-ripper, which he called “the work of independent authors—they’re to blame”. 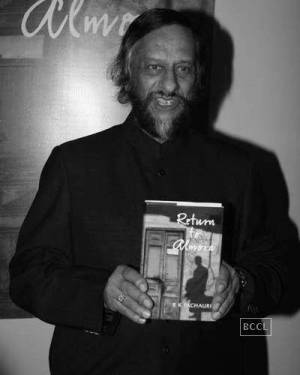 Framed: A visibly-upset Rajendra Pachauri (pictured) poses with a copy of the libelous counterfeit that has been called “as heinous as The Protocols.”

Any connection he has with the book begins and ends with the royalty checks he receives from its disappointing sales, he stressed.

That hasn’t stopped opponents of science trotting out the stilted, incompetent smut at every opportunity in their desperation to discredit Pachauri, who probably embodies science more than anyone else in the entire climate movement.

END_OF_DOCUMENT_TOKEN_TO_BE_REPLACED

Former climate scientist Rajendra Pachauri yesterday provided the first public clues as to why he stepped down as the moral voice of the global warming movement in February. His sudden resignation blindsided the pro-climate world, which has been waiting for an explanation ever since. Until now, even the most religious reader of the UK Guardian, Skeptical Science and Live From Golgafrincham—a demographic that prides itself on its up-to-date command of all issues climate—could only speculate.

Pachauri began by describing his abrupt exit as “an intensely personal decision,” adding somewhat cryptically that he’d retired “to spend more time with [his] attorneys.”

Held yesterday, the press conference was intended to calm months of uninformed conjecture—and growing concern—on the part of the evidence-based community, now leaderless. And, perhaps because he was flanked at the podium by both his wife and his girlfriend, Pachauri (who has long been admired in the West for his support for the plight of Indian women) quickly earned the twittersphere’s seal of approval. Feminist tweeters were first off the mark, noting the eco-guru’s relaxed, unthreatened demeanour in the presence of the two strong women. 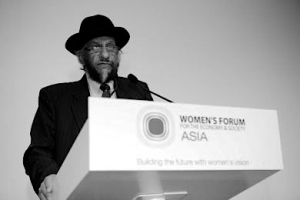 The Philogynist Wore a Fedora: While Pachauri himself is not a woman, he’s always had women’s backs—and the support is mutual. Unlike other male feminists, he assured the 2010 Women’s Forum in Asia, he doesn’t do this to get laid. If that were his game, he womsplained, there are about 100 other cons that would return a higher quantity and quality of quim for far less ass-pain. “And that’s just off the top of my head.”