A bluffer’s guide to those names you keep hearing but don’t quite know why.

What you should know
to avoid embarrassing yourself

Who:       Barack Obama
What:     President of the United States of America [USA]
Where:   A large republic in Subcanadian America 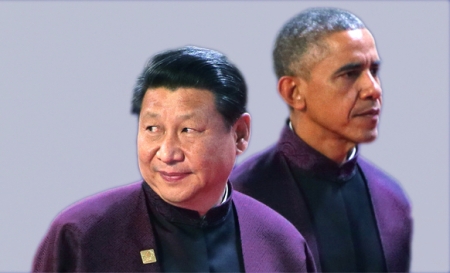 The People’s Dork: Obama is an unabashed Trekkie.

Although he acts and speaks like a white guy, Obama is actually biracial. On June 4, 2008 he was sworn in as the 1st black President and the 44th white President in US history.

Whereas US Republicans have a long, meritocratic history of promoting talented persons of color (think General Colin Powell and Condoleezza Rice), the left has traditionally viewed race as a handicap. So it’s no exaggeration to say Obama made history by achieving such a high rank in the Democratic party, which until recently has harbored former Klansmen like Senator Robert Byrd.

Vice President Joe Biden once credited Obama’s electability to his daily showering and use of complete sentences.

Stone cold leader: The Commander in Chief’s iconic pose at the precise moment when he kills Osama bin Laden multiple times in the head and body.

What you should toss off
to impress your friends

Rarely is the question asked, where our children at? What we need is a grass-roots fight against illiterate kids of all colors, and none; it’s up to us ordinary citizens to do something about them. Do you really think the fat cats in Washington are going to lift a finger? They could [sic] care less.

What he is like:
winning the conversation by taking it up to the personal level

Obama is an orator in the tradition of Al Gore, all lexicon and no prosody, closer to urbane than urban but not exactly oozing with charisma at the best of times. If you wanted to smash stereotypes of black men as rhythmic, virile and spontaneous, you could hardly genetically-engineer a better counterexample than Barack ‘Big Ears’ Obama.

Thanks to a historic five-President deal giving Ebony magazine unprecedented access to the First Family (and their next four successors), we know more about the Obamas personally than any previous residents of the White House.

“They’re just ordinary teenagers who care about boys, sports and grades,” says Michelle Obama. “They speak ebonics at home when they don’t want Dad to understand!”

How does the First Lady describe the President’s lovemaking style?

“Intensely private; a work in progress; nuanced, but at no time colorblind or apolitical. A quintessentially American act: culturally coded and loaded with 400 years of intersectionality.”

Does the couple have any cute pet names for the President’s sex organs?

“In the bedroom my husband becomes Lovemaker-in-Chief,” says Michelle, “and his sceptre and orbs of office are called Oathkeeper, Hopebringer and Changemaker.”

Obama on the day the rise of the oceans ceased to accelerate:

I’m a realist at heart, cynical and unpretentious to a fault. So I’m under no illusions about what men shall say of the Age of Obama three-, four-, or five-score years hence.

My legacy will not be defined by the 3 and one eighth inches of sea level rise I prevented in my very first act of pure executive will. History has already forgotten that magical moment. I knew from the start that, no matter how many million people I rescued using my sheer mind, less [sic] than 10 of them would ever know enough science to thank me for my mental retardation [of rising sea levels].

Then again, being a hero means virtue is its own reward.

All of us in the [Affirmative Action] movement are acutely aware of Dr King, Jr’s legacy. Even two score and five or six years later, we’re still living in his long shadow.

Martin Luther King had a delusion.

The great Negro evangelist stood on these very steps and vividly described his symptoms to the biggest congregation that ever assembled for a Christian leader except the Pope.

“I have a hallucination,” he famously said. What the Reverend saw, apparently, was a colorblind nation. And that vision has held Americans of diversity back ever since. We could have had a national conversation on race decades ago—scores ago!—if not for the good Doctor’s failure to see beyond the content of a person’s character.

And for everyone in the Affirmative Action cause, King’s nightmare became only too real. It’s been no cakewalk ensuring all persons of race the right to be judged by the color of their skin. It’s been a long, uphill march through the institutions.

But we must never give up the fight against the soft bigotry of excessive expectations.

It was a truth universally acknowledged that no half-black man could ever be re-elected President of the United States after having already been elected to, and serving a term in, that office. I was still stung by the memory of my third-grade teacher’s guffaws on the day I stood up in front of the class and announced that when I grew up, I wanted to be a two-term President.

My classmates had given the safe answers. Answers like ‘drug dealer,’ ‘single mother with four kids by six fathers,’ ‘one-term President’ and ‘misogynistic rapper’… Why? Because they lacked the audacity of hope.

So I had to tell Americans the bad news: that while they’d shown a bit of greatness in the past, they might not have the greatness it took to re-elect Obama-Biden. Only the greatest countries in the world did things as historic as that. Of course, I believed Americans were up to the challenge, I assured them; I had faith; but France, Germany and the rest of the old world didn’t seem to think so. They were all snickering at us, I said, behind our backs.

And unfortunately there was no way to wipe their smug smirks off their faces, as far as I could see. Well, there was one way. But it would be pretty audacious.

A Note From the Editor

With CN’s Know Your Newsmaker series, you’ll never have to heed Mark Twain’s maxim that it is “better to remain silent and be thought a fool” again.

Read today’s KYN and you can not only confidently participate in, but utterly dominate, the average superficial discussion of the interesting figure who is Barack Obama at your next faculty mixer.

2 thoughts on “Know Your Newsmaker: Who is Barack Obama?”