He’d had us at hello, but the reverent hush of the Arrhenian Auditorium now became pin-drop silence. 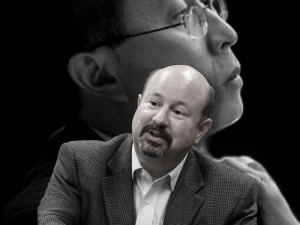 It was an Enlightenment cri de coeur that not only left a lump in every throat, but might have been the official theme of the day’s proceedings. We had come here from all walks of academia, every imaginable postdoctoral discipline and at least three ethnicities, but would leave inflamed by a single truth: that an existential struggle is playing out in real time, a civil war between science and unreason, glasnost and obscurantism, epistemology and agnotology, expediency and truth.

Dr Mann, who lists his area of expertise as science, was the guest of honor at today’s no-expenses-spared opening of the Wei-Hock Soon Studies Institute. The University of Sydney hopes the $20m centre will become a global hub for the investigation of the politics, ethics, philosophy, finances and activities of the eponymous climate contrarian.

Mr Soon—better known by the nom de guerre ‘Willie’—is defined by Wikipedia as “an American solar physics ‘expert’ who vociferously and often vocally disagrees with what mainstream climate science says about the science of our climate, has never been shy about his personal partisan politics, yet seems to be rather less forthcoming when it comes to the question of who pays him, how much they pay him, and what conclusions they pay him to reach.”

Read the full article by becoming a CN Inner Circle member. No need to give your credit card details—simply pass a battery of ideological litmus tests.