In a sign of the times, the board of directors of The Conversation has announced that the iconic blog will cease taking reader responses. For the millions of ordinary Australians who’ve come to rely on the site for intelligent discussion, bereavement is expected to give way to anger in coming days as blame is sheeted home to the climate skeptics who’ve used their disproportionate vocalness to make dialogue impossible.

The policy doesn’t take effect immediately, senior editor Michelle Grattan assured the public this morning. For now, all feedback from the community will merely be deleted as soon as it’s posted, with full abolition of the comments section to take place in February.

The government-backed blog franchise, which now has branches in the UK and US, started life in 2011 as a bold experiment in bringing intellectuals and the non-intellectual public together. But it was soon nicknamed ‘The Nonversation,’ for reasons that are not clear, but probably due to the low quality of readers’ responses to the professionally-written posts. With few exceptions, commenters failed to supply valid refutations—backed up by peer-reviewed sources—of the above-the-line thesis, and some were even known to spout ‘zombie talking-points‘ (arguments that have already been rebutted at least once on the Internet, to no apparent avail).

“Conversation is the lifeblood of democracy, but it depends on respect,” wrote founding editor Andrew Jaspan in today’s Age, “for those who actually know what they’re talking about. You can’t have a conversation if the other side insists on butting in every 10 minutes.”

The move is seen as part of a broader trend, with Scientific American forced to take similar steps last year. It appears The Conversation is just the latest casualty of the commenting tactics of those who deny anthropogenic climate science.

John Cook is a contributor to CN and founder of the leading anti-skeptical site for non-scientists, Skeptical Science.

Mr Cook says it will now be harder than ever for denialists to pretend they’re all in favor of the free exchange of ideas.

“If they’ve got nothing to fear from open discussion, then why do they keep forcing us to censor it?”

Tellingly, notes Cook, the problem rarely crops up in reverse. “There’s a reason you never hear about their sites having to curb free speech: at the risk of explaining the obvious, it’s because our [pro-science] side has manners. We may not agree with anything the skeptics say, believe in or stand for, but at least we know how to listen to their opinions and correct them without being rude about it.

The Conversation’s management, meanwhile, is playing down the significance of today’s announcement, insisting it doesn’t mean the skeptics have won the conversation wars. 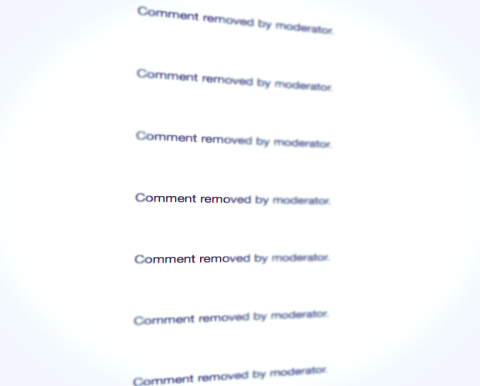 The new look Conversation, as the website appeared this morning. Readers are free to comment on articles until the new policy officially rolls out, but their posts will be auto-deleted. “Freedom of speech doesn’t mean freedom to be heard,” as a special post reminded readers today.

“The site isn’t going anywhere—and most of you won’t even notice the difference,” Ms Grattan promised her readers in a special post today.

Grattan spoke with CN by phone this afternoon.

“The decision was a matter of basic prioritization, of doing what we’re best at,” she explained. “Internal polling says we deliver almost all of our value to the public, if not all, above the fold. Our contributing authors tell us, time and time again, that they can’t even be bothered reading [punters’ comments] most of the time. That’s how… low-yield they are, if I can put it that way.

“Remember, we already delete fifty percent of what our readers say, at a conservative guess—we have done for years. So it’s not as if they’ll suddenly be unable to handle it. Is anyone really going to miss the other fifty percent? When did you last read anyone complaining about our deletion practices?”

But not everyone is happy. The change is already the subject of official complaints from mainstream scientists and public thinkers, who want to know why it took so long.

One prominent intellectual, who asked to remain anonymous to protect his job as Professor of Public Ethics at the Centre for Applied Philosophy and Public Ethics and Vice-Chancellor’s Chair in Public Ethics at Charles Sturt University, says the problem of denialist commentary was known about from the beginning.

“The quality of the dialogue just got better [with today’s announcement],” Hamilton concedes.

“But the question remains: who decided to let the other side pollute it, with impunity, for five years—and why?”

Hamilton expects heads to roll over the “inexplicable delay,” though it could take as long as a couple of weeks.

“Institutional incompetence and inertia on the scale we’ve seen here might go unpunished in the private sector, where the almighty dollar is all that matters,” he told CN. “But The Conversation is a government initiative, not some fly-by-night garage blog. With the entire intellectual and financial might of a modern state behind them, you’d expect them to be a bit smarter.”

9 thoughts on “The Conversation to ban comments”